INSIDE THE FAIRFAX DRESSING ROOM, by Chris Freel

By Chris Freel, the bloke who's going to run faster than you again this year.

It's that time of year again when thoughts turn to warming weather, beach weekends and how to get rid of the excess baggage you have added to your midriff over the winter months. For me, there is no better inspiration than to get focused on beating your arch rivals at the Ad News Challenge.

This will be Fairfax's third year participating and as well as a couple of super keen and very fit individual entrants, we will again have at least three teams taking part. We have a lot at stake as we come off the back of triple success last year, winning men's, women's and the overall titles. Suddenly the love handles are looking even more conspicuous and as I write this I have also added a memo to give the personal trainer a call later today. At the moment I can barely run a bath so there is a very long way to go to get match ready. Only about 10 weeks and 10kgs to shed!

There is no doubting that we are a very competitive bunch in media and we are very proud to be returning to defend our titles. However, there is serious concern in the ranks of the men's team as the recent changes to the course mean that our cycling 'banker' through Martin 'Lance' Wood has been eliminated. All who know Woody will know that this has put a severe dent in out title hopes. Our lobbying and protests have fallen on deaf ears. This is devastating news and we are quickly trying to transform Woody into an assault course magician, although without a saddle and Lycra he is a very different man.

On top of that, Kayak king, Ed Harrison, will now be in the opposition ranks although we take some solace in the fact that Siggy the Seal will also hopefully be on the swim/float leg. On the girls team, one champion athlete has also run back to Ireland so we are looking for a secret weapon to fill the void. With time ticking, it's all hands on deck to build the elite commando units we need to take on the cream of the industry. Failing that, we will definitely compete hard at the post race bacon and egg sandwich marquee. 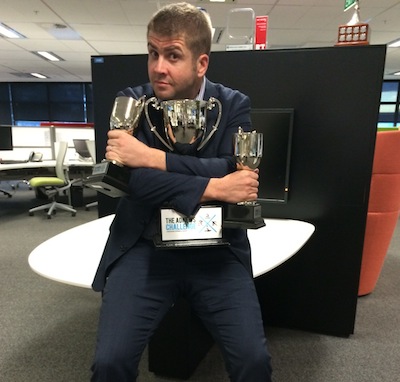 [So that's three awards for sport, and three others...?: ed]

On a serious note, I would like to thank the team at AdNews and UNLTD for putting on a fantastic event. It's great to get together with some healthy competition and enjoy a really fun day out with family and friends. We look forward to it every year and the fact that it is all for a fantastic cause is the icing on the cake (best stay away from those cakes!). Look forward to seeing you all there and competing hard.

Who knows, maybe even Sharb will trade in his sharp suit for a pair of running shoes and get involved? Loser donates an extra $100 to the cause...?